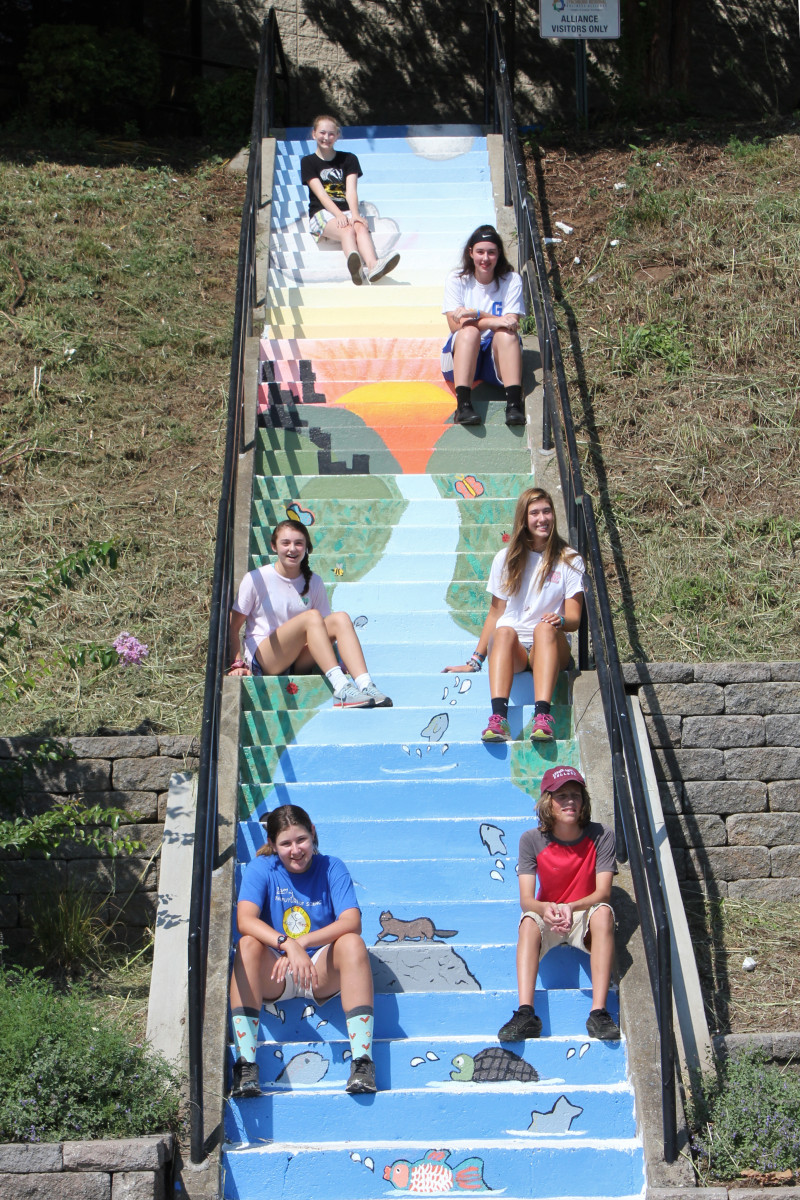 This summer six teens spent one week under the guidance of Nugent Koscielny and Elise Spontarelli to design and create a public mural, and a website cataloging public art in downtown Lynchburg. The Lynchburg Public Art website and Sunset on the James mural were designed and created by Sage Grant, Virginia Blair Trost, Meredith Plunkett, Shelby Kent, Augustus Knebel, Carolyn Royster, and made possible by Vector Space, James T. Davis Paint and Design Center, and the James River Council for Arts and Humanities.

Before camp began, instructors scouted locations and decided on the stairs leading from Rivermont Ave to the Lynchburg Regional Business Alliance. With Alliance leadership enthusiastic about the idea and an MOU with the City of Lynchburg (who owns the property), the site was secured for painting. We gathered supplies, including paint donated from James T. Davis, and power washed the steps to prepare them for painting.

On day one students were introduced to Vector Space and their projects for the week. They traveled to the stairs to prime them, which was a great opportunity for thinking and brainstorming art ideas. They were introduced to the basics of websites and web hosting, and logged in to our self-hosted Wordpress site to get started. By Tuesday, a consensus about the general design of the steps had been reached. Students wanted to focus on the James River, which mirrors the stairs, incorporating scenes of sunset and the Blue Ridge Mountains. Day two also began the process of photographing and cataloging public art in downtown. We traveled to 14 different pieces of art to learn about and photograph them. We met artist Arnulfo Jacinto at his "Greetings from Lynchburg" mural, and learned about his career as an artist. 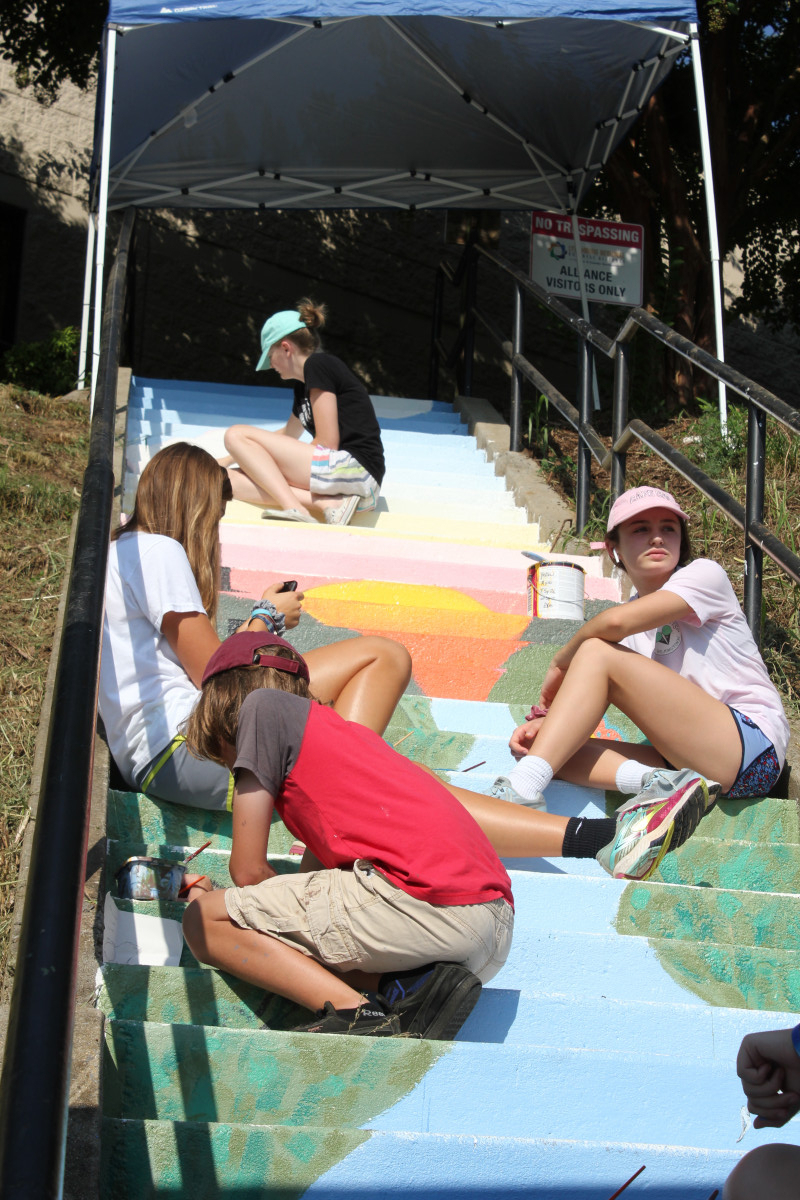 On day three we were back at the stairs, splitting the group in half to break up time spent in the heat and sun. While one group painted in the background of the sky, the other worked to upload photos to the website, modifying the theme and content as needed. The groups switched after lunch, continuing to upload content tot he website and paint in the background colors of the stairs. On Thursday we continued detail work for both projects. Modifying the website theme and plugins resulted in a more cohesive look and better functioning site. Stair details were first chalked and then painted, adding clouds, sun, mountains, buildings, and wildlife. We took a break to hear from local artist Christina Davis, who shared how she went from high school art student to professional artist, dabbling in various types of art along the way. Her insight and advice were great reminders for our young artists. The News & Advance also stopped by to chat and photograph our progress.

Friday spirits and temperatures were high. The whole group spent the morning at the stairs to finish up before afternoon heat set in. As students finished up our friends at the Lynchburg Regional Business Alliance stopped by to thank the students and offer cold water and refreshments. We packed up our supplies, high fived, and brought everything back to Vector Space. During lunch we heard from guest speaker Nancy Lilly with Lynchburg Water Resources, who let students know about another opportunity to create public art in downtown Lynchburg: Art Storm. In the afternoon Meredith and VB interviewed their peers to gather artists statements, while Augustus brainstormed and collected feedback about a name for their mural. The finishing touch was adding the newly minted "Sunset on the James" mural to the lynchburgpublicart.com website! You can read the students artist statements below, and visit the website and the mural site to see their work.

Sunset on the James

Shelby: Favorite part about the stairs are how the animals provide a cartoon texture and add personality. She also likes the sun set and how the clouds give off different perspectives from various distances with the shading, which was her goal. Shelby thought that these stairs always needed something and was happy she could contribute. She thinks that the staircase will inspire the public to pursue their dreams.

Carol: When she looks at the staircase she feels a need to smile and is happy with the colors bouncing off of the stairs. Carol’s favorite part of the stairs is the sunset because it is filled with the most color and she likes the gradient affect. She thinks that the stairs will draw people to them and will be a popular place for pictures to be taken.

Augustus: He has a feeling of accomplishment when he visions the stairs. His favorite part about the staircase/mural is that the river in the painting reflect the James River and Lynchburg’s history. He thinks that the mural will mostly draw attention to drivers and people taking a walk or run. 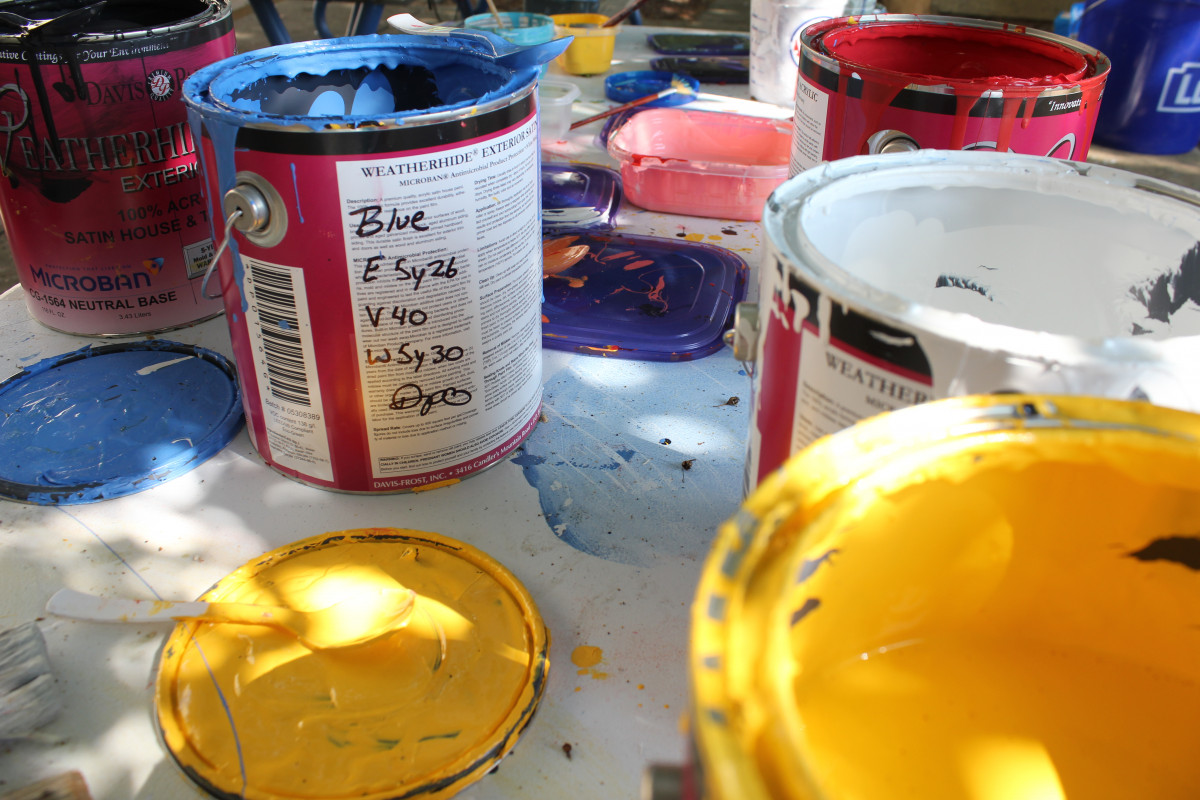 Sage: The look of the stairs brings Sage a sense of happiness from all of the colors. She thinks that it effects Lynchburg in the way it adds more character to our town. She also enjoys the thought of people taking pictures by the staircase.

Virginia Blair: When VB hears the word stairs, it brings her a feeling of elation. She immediately pictures the painted stairs. When she looks at them, she thinks of her best friend and the fun they had contributing and giggling. It reminds her that best friends can help you through any tough times. VB thinks that the “Sunset on the James” mural will add warmth into the city and brighten everybody’s day.

Meredith: She takes pride in the stairs and the fact that they were completed in a week. After painting the stairs Meredith felt more confident and how the color will take your eyes. It lifted her up when she heard people honking their horns and that they appreciated the fact that something was changing Lynchburg in a short amount of time. When working on the mural she never stopped laughing with her best friend at the same time as working together to contribute to the painting.

Where: On stairs outside Lynchburg Regional Business Alliance, 300 Lucado Place

A set of stairs that has a mural of the James River and a setting sun.