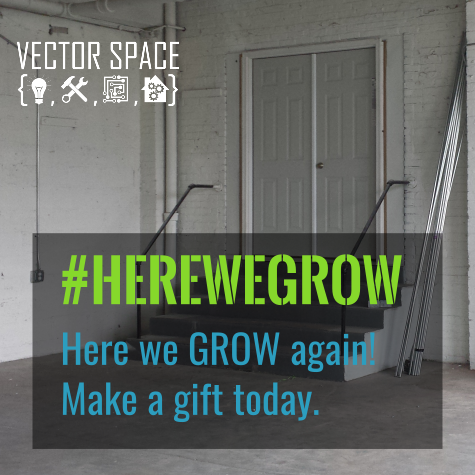 We are excited to announce an expansion, with work beginning next month! Since opening at 402 Fifth Street in Spring 2015, we have expanded once before in 2017, refinishing the unoccupied second floor of the building. Now we will work with landlord Riverfront Warehouse to incorporate nearly 4,000 additional square feet at 406 Fifth Street.

An internal double doorway will connect the two spaces and membership access will include both buildings. The additional space will house a newly expanded woodshop, as well as private office and studio spaces. This additional space will ensure safe working conditions for growing membership numbers and allow for new educational programming. Membership is currently at 92 individuals, with enrollment for new members open again in January. Vector Space serves more than 300 local students in project-based classes and workshops each year. New summer camp offerings will be available this summer, expanding the reach and depth of educational programming.

Are you moving?
No. We will remain at 402 Fifth Street, adding 406 Fifth Street as additional workspace. An internal double doorway will connect the two spaces and membership access will include both buildings. Once finished, the makerspace will total close to 12,000 square feet.

What are the plans for expansion?
The additional space will house a newly expanded woodshop, as well as private office and studio spaces. During December we will make electrical updates and a few infrastructure improvements. Woodshop equipment will be moved in late December and up and running by early January.

How can I support this growth?
As you plan your year end giving, consider a monetary gift to Vector Space. Some of our operational costs are covered by earned income from membership and classes, but this earned income supports only 40% of our expenses. Individual donations, grants, and corporate giving allow us to provide outreach opportunities, scholarships, and the very best in maker education for youth and adults in our community.