From vector-space.org
Jump to navigation Jump to search

We have three CNC routers:

The Phoenix and AXYZ CNC routers can both be controlled using their respective gamepad controllers. The button configuration is shown below. 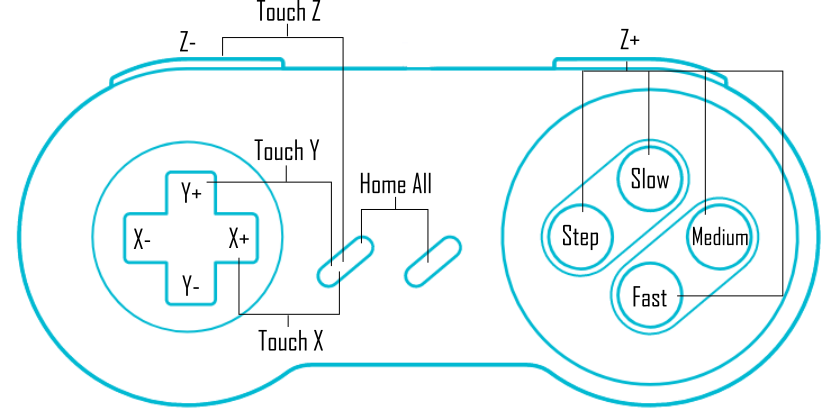 There are many ways to complete this workflow, but included in this section are descriptions of how to make a successful cut with two different sets of software. The first is the most simple, the second more challenging but more powerful.

One method of getting from idea to CNC routed part is to create your CAD design in Inkscape, then use SheetCAM to generate the tool paths. If carving a 2D design like a sign, this is the quickest and simplest method. Below is the general outline of this approach.

Another method of using the CNC router is to use a program like FreeCAD to generate your 2D or 3D model, then also doing the CAM within FreeCAD. The benefit to this approach is that everything is done in a single program, and that the program is significantly more powerful and capable of handling 3D designs.

The Shapeoko can also be controlled with the workflow described above, but it also comes with a software package called Easel, which is meant to simplify the process.

== General Issues ==  Turn the machine on, so that the motors energize, but don't tell it to move. Do not turn the spindle on. Try to wiggle the spindle left and right by hand. Can you move it? If you can, watch carefully to see what moves with it. Does the belt move but the pulley doesn't turn? You have a loose belt. Does the pulley turn too? You have a loose pulley set screw. Does the entire gantry move with respect to the stationary rails? You have loose V-wheels or eccentric spacers. And so on. Repeat for back and forth movement, and up and down too, if that's also causing problems.

The console window will show the command being sent and a confirmation of "ok". However, the active state goes to "Queue" and never returns to "Idle.

The machine will respond to single commands, but will not accept a downloaded file and will endlessly repeat some statement to the console.

Set Grbl setting for "step idle delay" in milliseconds to 255 (suggested default). It will always energize the motors to a hold position. If set to some other value, motors will be turned off after the specified time.

If the machine's behavior doesn't match what is simulated.

Radius of corners is different

Stairstepped diagonals, jagged circles/curves, loud squealing or 'ker-chunka' thuds, gantry chattering, mis-aligned edges.  A useful troubleshooting technique for this is to listen to the machine:

Deviations in slots when cutting

The bit is pulled along creating random path deviations which get worse as one gets deeper into a slot.

Deviations in shapes when cutting

The machine lags behind at changes of direction, distorting shapes and creating flat edge at the extrema of rounded forms.

The bit is pulled along going deeper into the material than it should.

The bit is pulling the material up or twisting it as it cuts.

Endmill is either bent or deflecting.